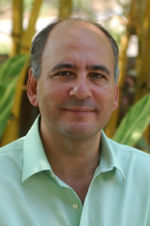 Dr. Luis Martínez-Fernández is a History professor well known for his expertise on Latin America, particularly the Hispanic Caribbean. His current research focuses on Cuba and he is penning a general history of the Cuban Revolution. He also is an expert on Puerto Rico, other areas of Latin America, and Hispanics/Latinos in the United States.

In 2002, Martínez-Fernández was featured among the nation’s most influential Hispanic/Latino leaders in the nationally televised special “Viva! Top Twenty Powerbrokers.” He has served in the advisory editorial board of H-LATAM and The Latin Americanist. Currently, he serves on the editorial boards of Cuban Studies and Herencia Cultural Cubana as well as the College Board’s History Advisory Committee.

He is also member and Chair-elect of the Academic Council of the College Board. Martínez-Fernández is a member of the Advisory Board of the South Atlantic Humanities Center and is active in various cultural and artistic organizations in Central Florida. In 2005, he founded the annual Latin American Cultural Festival of Orlando.

Martínez-Fernández participates frequently in professional conferences and scholarly meetings, and as an invited speaker at universities and other forums. He also serves as a consultant and media resource in his fields of expertise. He has appeared in The New York Times, The Wall Street Journal, Los Angeles Times, The Miami Herald, London Financial Times, Orlando Sentinel, MSNBC, Associated Press and the national news wire services of Spain, France and Mexico.

Martínez-Fernández received his bachelor’s and master’s degrees from the University of Puerto Rico and his doctorate from Duke University.