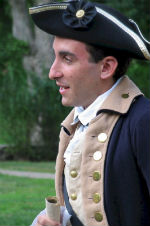 Born into a theatrical family that includes his mother Marjorie Goldman portraying Susan B. Anthony for AHT, Ben Goldman began his acting career at a young age. Active in his high school’s theater program, Ben continued to pursue his dramatic passion at New York University, studying Dramatic Literature and French. Ben’s fluid French and impeccable French accent, cultivated when he studied abroad in Paris as an NYU undergraduate, combine for an impressive artistically-authentic portrayal. Other talents include a rich singing voice, as part of a barbershop quartet Ben formed before he completed his Bachelor’s Degree at NYU.

In 2007, the American Historical Theatre tapped Ben to portray the young Lafayette, who was 19 at the Battle of Brandywine.  Ben’s uncanny resemblance to the youthful Lafayette, the actor’s ease with the French language and spot-on French accent, as well as his quick wit and intelligence converge for a convincing portrayal of the young Lafayette.  When the White House commissioned AHT to create and perform On Fire For Liberty, Goldman was the natural choice for the Marquis de Lafayette. The two-person play highlighted the friendship between two people, MDL and George Washington, and between two countries, France and the emerging United States. On Fire For Liberty was performed with great success in the East Room of the White House for guests that included President George W. Bush and French Republic President Nicolas Sarkozy.  President Sarkozy prided himself on knowing who was French and who was not, but laughed heartily when he discovered that Ben was native to the United States and not to France.