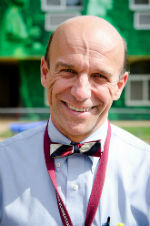 Gordon Grant will begin his tenure as the Director of Education at the North Carolina Outward Bound School in July 2016 after working for Asheville City Schools for nearly 25 years. He spent 14 years at Asheville Middle School as a teacher and assistant principal. He later became principal at the Randolph Learning Center, the district’s alternative school.

While principal at Hall Fletcher, Grant has helped implement a year-round or balanced calendar aimed at reducing summer learning loss. The school has also added a new after-school music program that is a partnership with the Asheville Symphony.

Before working for city schools, Grant spent 20 years as an outdoor educator at the Nantahala Outdoor Center and working with North Carolina Outward Bound.