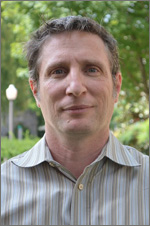 David Cline is Assistant Professor in the History Department. His research focuses on 20th century U.S. social movements, oral history, and public history. He has a particular interest in the roles of religious progressives in social movements, including the civil rights and women’s movement. From 2008-2011 he was the Associate Director, and for a time the Acting Director, of the acclaimed Southern Oral History Program at the University of North Carolina at Chapel Hill. Dr. Cline’s public history work has included museum exhibits, contributions to radio and film documentaries, large-scale oral history projects with the Library of Congress and others, and a 2005 project to document the Cherokee Trail of Tears. David is the author of Creating Choice: A Community Responds to the Need for Abortion and Birth Control, 1961-1973 (Palgrave Macmillan, 2006) and was a recipient of the National Council on Public History’s New Professional Award in 2004. He is currently writing about the African American experience during the Korean War. He teaches courses in public history, oral history, research methods, and the civil rights movement.