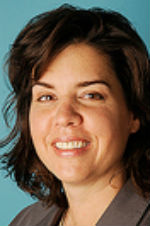 Karen Wilkinson is the Director of the Tinkering Studio and sees her role at the Exploratorium as an advocate for making as a way of knowing. She believe deeply in studio pedagogy, and the ability we all have to think with our hands.  As an undergrad working in environmental design, she came to see museums as places that recognize this approach. Now, years later, she is even more committed to the idea that constructionism is an incredibly powerful way of learning, and that aesthetics matter a great deal. These two ideas are often overlooked in more formal education settings, outside of kindergarten or graduate school. Informal learning spaces for making and tinkering offer people a chance to connect to their own learning in a deeply personal way, which is why she’s thrilled to be able to work with such a delightfully quirky group of people in the Tinkering Studio.