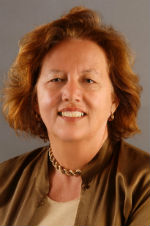 Dr. Kristina Hooper Woolsey is a cognitive scientist known as the “mother of multimedia” for her pioneering work at the Apple Multimedia Lab. Woolsey was a founding member of the Apple Human Interface Group. She was named a Distinguished Scientist by Apple Computer in acknowledgment of her pioneering work in multimedia in education, and an NMC Fellow by the New Media Consortium for her lifetime of contributions to the field. In 2009 Woolsey was the Project Director for a Capital Project at the San Francisco Exploratorium. She was also a member of the Emeritus Board of the New Media Consortium, an organization she has worked with since its inception, and Head of the Advisory Board for the Learning, Design and Technology Program at Stanford University. Woolsey also serves as Adjunct Faculty in the Department of Cognitive Science at Case Western Reserve University. She is Director of the Marin Learning Conservancy and served as president of the Ross School Board of Trustees. She is also a member of the Advisory Council for the New Orleans Center for the Creative Arts. Her most recent projects include the not-for-profit Golden Age of Multimedia, which she authored, and New Media Thinking in which she served as Director.